There was no doubt it left a trail of destruction. Portions of tin torn and bent, limbs hanging precariously from wires, tomato plants shredded spreading like the aftermath of a party popper in what was his garden. The storm had built up in the west all afternoon waiting for nightfall to visit his small town.

In the freshness of a new day he surveyed the damage around his home, habitually scratching his right ear as he digested the scene along the street. He had seen worse – like the storm of November ’87 when five houses had lost their roofs and Shooter’s house had blown away completely while he sat on the toilet. The thought of Shooter being flung across the paddock with his trousers down around his ankles bought a bit of smirk to the lips, glad that all turned out OK that day.

He wondered how his tree had faired in the ferociousness.

It had seen a few storms in its life. It had stood strong against the trials of Mother Nature from battering winds, pounding hail and drought, heatwaves of up to forty seven degrees and freezing winters where the morning frosts chilled it roots to minus 7.

As he wanders around the garden his mind drifts back to the day the tree was planted.

August 30th 1952. It was an ordinary August day, the same year electricity came to town. The day was clear as the town was awakening from its winter slumber. The dirt streets were dry, the slosh of the winter rains drying up in the warming sun of an Australian spring.

The town was in celebration mode. Its first recreation park was being opened on this momentous day. The police horse paddock had been bought through the Joint Coal Board in 1949. Over the next few years the area was fenced and a children’s playground constructed and presented as Hamilton Park.

It created quite a bit of excitement for the small town. Especially when the local MP, the honorable R.G. Hamilton, a World War 2 lieutenant turned up for the ceremony. Everyone was in their Sunday best, even though it was only Saturday. The CWA ladies had put on afternoon tea, complete with freshly baked scones and sponge cakes. The two pubs in town had stocked up on extra beer, speculating that many from the district would travel into town for this ‘auspicious occasion’.

His mum had paid extra attention to him that morning. She had made sure his shirt was clean and properly pressed. He even had to have a haircut the day before. He had been under strict instructions not to play football on the spare block with the crew in fear he would scruff his knees or dirty his clothes.

At 3pm the Honorable R.G. Hamilton declared the park open to all the townsfolk and people of the district. He stepped over to the 11 year old boy standing with the official party and asked if he needed help planting the commemorative tree.

The boy, his shirt tails hanging out and grass stains mixed with a bit of dried blood streaked down his right leg, stepped up in bare feet and said “Its OK Mr Hamilton, I got this. Don’t want to get ya hands dirty, sir” and gently plopped the fledging Athel pine sapling into its forever home.

The townsfolk cheered, his football mates laughed, his mother gasped, his father snickered.

“Guess he wanted to play footy with the boys, dear”.

That was over sixty years ago and his tree still stands. The original pine trees in the park remain to keep it company.

The roads are now tarred, there is even a bit of curb and guttering to mark the footpaths. The town hall built in 1958 in its shadows, the pub on the corner long closed. The cars move faster and quieter past, the people pass without a second glance at the tree.

The tree has provided shade and shelter for Anzac day marches, observed local Christmas Tree events in the park.
It has prevailed in the distance while major tennis tournaments were played, nowadays standing quietly with the tennis courts now left in silence.

It has listened to many a drunken problem as drinkers headed home from the pub, supported a few who needed to stop for a rest before the long walk home to the wife. It has stood strong while several generations have climbed and played amongst its branches and watched over others as they scaled the new playground equipment or kicked a ball around within the bounds of the park.

Its trunk is growing weak and hollow, a few of its limbs have failed and fallen.

But still it stands as a reminder of the bygone days. 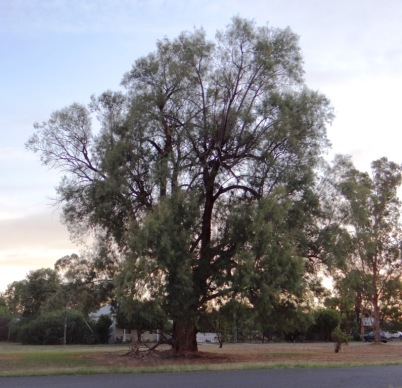