“Are you coming to the Meganuts on Saturday?”

“It’s a few cars and markets in Mendooran – come on over.” Urged my brother-in-law (BIL for short), a local of Mendooran for a few decades.

Now I know there are a few things I need to explain.

You are busting to ask…Where is Mendooran?

Its about 350 kms west of Sydney, NSW, nestled on the banks of the mighty Castlereagh River – claims to be the oldest settlement on the river as squatters settled in and around the district in the 1800s.

Today the population is close to 300, with a community pride and heart of a thousand. I experienced a piece of this community spirit last weekend as the town and its people hosted the annual Mendooran Meganuts and Markets.

So… what is Meganuts? It took me some time understand this too.

Was it some huge nut that you can only find on the banks of the Castlereagh, and we would be given a bucket to scramble to pick them?

Was it some sort of market that sold really big things or lots of them?

Did it have something to do with the mega murals displayed on many of the old shops and buildings around the town?

Was it just a term of endearment for Mendooran locals?

I had been commandeered to help with the food stand, where there was going to be not just the traditional bacon and egg rolls, snags sandwiches and coffee but Pea n Ham soup, Curried Sausages and Pulled Pork rolls with homemade apple sauce. My BIL doesn’t do anything by half – and as we chipped the frost off the windows and attempted to start a campfire I did start to wonder if he was meganuts!

It wasn’t long after the first slice of bacon was sizzling on the BBQ and the curried sausages were warming in a camp oven over the open fire that a stream of shiny, much loved vintage rolled into town. There were Fords, Chryslers, GMC and International Trucks, a Pontiac, a Fargo, Holdens, Hot-rods, Buick, Monaros, Willys Jeep, and a host of other trucks, cars and bikes that I have no idea what they were! I was in awe, even if I had no inkling of what I was looking at. There are magnificent.

All driven with exploding pride by nuts. 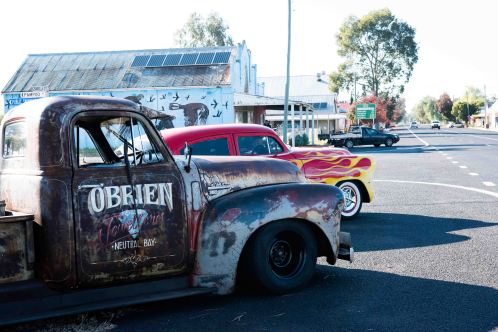 By mid-morning the main street of Mendooran was bursting with vintage glory. Most had been polished with love and attention, fully restored to shine again, while others were at various stages of renewal. They were driven into town by their keepers, coming around the pub corner at the top of town and making a grand entrance as they gently schlepped past the growing crowds near the Bowlo club.

There was no trumpets, bands or fireworks. Just good old fashion appraisal of each other’s treasure, awe at the investments in restoration and a catchup with old and new fellow nuts in the winter morning sun at Mendooran.

There was time to enjoy the gourmet fair and maybe pick up a bargain or two at the markets hosted by the local Bowling Club. As well as the grand spread put on by BIL you could grab a few home baked goodies from the CWA ladies and some locally made cheese produced by two lovely local ladies, Pip and Deb at Blue Sky Cheese to keep the appetite satisfied before the engines were warmed and they set off for a town tour and the afternoon events at the showground.

It was a mega morning. Mendooran Pride on show.

A quaint town with friendly people, loads of history and stories to tell. It’s not that far a drive from anywhere. Take a trip sometime, detour off the main highways and you never who or what you might see.