I missed the memo yesterday. Or at least that is what I started to wonder. It didn’t hit me at first; I ploughed on oblivious to the change. I turned the corner and it hit me.

I was faced with a wall, a wall of people heading in the opposite direction to me. The country girl was back in the city and trying to cope with the hustle and bustle of “peak hour”.

My head was cloudy and grey 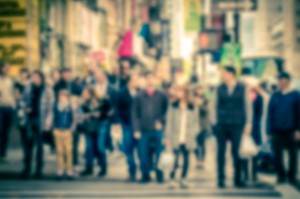 even though it was only 8am.

My sleep had been a broken one. The motel pillows hadn’t been replaced for quite some time, they were hard and unforgiving. I do wish my work colleague hadn’t planted the thought about the number of other people that had snored and dribbled on these pillows I was now trying to peacefully sleep with. As I finally dozed into a light sleep the sirens and noises of the eternal city disturb my semi restful state, a stark contrast to the silence of the country where an occasional Koala may be grunting or a rooster crowing.

I wake still weary and heavy. This jet setting life isn’t quite as what I make it out to be on my Facebook posts!

I am however excited to be spending the day down near The Rocks, with the iconic Sydney Harbour Bridge and Opera House beaming at me through the conference centre windows. My spirits brighten at this thought and I set off to catch the train down to Circular Quay, my suitcase dragging behind me as a constant companion lately.

That’s when the moving wall of humans hit me. The thousands of city workers that are heading in the opposite direction to me, scampering to their offices from their suburban retreats like a mob of sheep just let into a fresh lucerne paddock.

I move to the edge of the path and hope the mob lift their heads from their phones in time to see I’m attempting to swim against this tide. I bravely push forward, trying to look confident, acting like I do this every day. Not that anyone cares, no one is watching. A vast difference to walking down the main street at home where you could nod or say hello to every second person as you stroll along.

I observe other women walking confidently with their designer suitcase, noting their standard attire of business skirts and heels. They sure make my built-for-comfort-not-style boots stand out. How do they do it? I wonder if their feet ache at the end of each day. Or have I missed another memo about style without pain?

I continue to push through the throng to Central Station and finally onto Platform 20. I feel like running through the platform crowd high-fiving as I go…”I made it!” and pretend they are all cheering at my magnificent feat. I survived, I swam against the tide.

Until the train arrives at Platform 20.

Packed to windows and almost to the ceilings of MORE commuters. Another human wave hits me as they alight from the train. Where have all these people come from, where are they all going to?

I haven’t the energy to wonder this morning, I need to put on my battle face and charge into the commuter-packed train.

I finally arrive, greeted by friendly faces and strong coffee, the bustle of the city and the horns of the harbour ferries a muffled chorus in the background.

Ahh! My jet setting life! Are you envious?

A cosmic contrast from my normal commute to work, where I may pass three or four cars on my 15 kilometre drive, I may have to wait for a 91 carriage coal train at the rail crossing and sometimes, just sometimes I will have to weave through a herd of cattle that are on the move from one stock camp to the next.

You cant take the country out of this girl.

One thought on “Swimming against the human tide”