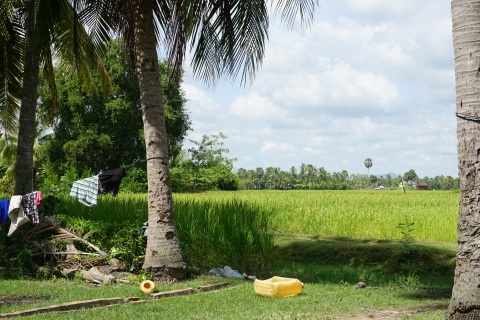 She stands at the sink overlooking the rice fields as the panicle, packed with grain sweep in a cooler morning breeze. The sun starts to colour the sky.

It had been a long night for her.

Her youngest had twisted in pain, his arms wrapped across his stomach, his eyes as big as saucers brimming with tears begged her to make it stop. Yet another night of little sleep for the family as his cries perforated the night in between short moments of fitful sleep.

The number of sleepless nights were becoming too many. Her family could not survive much longer. Her husband could not continue to work long hours in the field with little sleep.

She spied the pamphlet on the floor. It was stained with mud that had been carried into the house on little feet as they had darted outside in the rain to go to the toilet. She hoped they went a distance from the house, but she could hardly reprimand given the amount of rain that fell last night. She will check that later.

For now, she just needed to recharge.

As her tea brews she can hear the thump of coconuts falling outside. Husband is picking a few for her to take into the market. She wipes the pamphlet and slowly turns it over in her hands, looking with envy at the picture of a woman standing outside a freshly finished brick building. She recalls what the man from SAMIC told them.

“We can offer you a loan to build an outside toilet and install a water filter to give you clean water as well. It would cost you about $30-50 US dollars a month to repay. It will be a declining loan. The money is offered under the WASH program, to help provide water and sanitation. You could be the first in your village.”

Could they earn enough from the sale of the coconuts and rice to repay this and keep the family? She could take the buggy and find rubbish to sell if they needed more money. Her eldest was nearly old enough to help too. 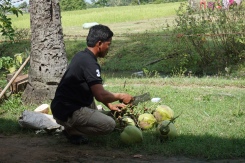 Her breath stops suddenly as she contemplates her children getting sicker. Too many in the district had died already from stomach complaints. They say it’s the bad water and no toilets that is doing it. They had no money for hospitals, yet it seemed only a matter of time before one of her brood fell too sick to recover.

There is yelling from below as the chickens scatter. The cow is off its chain again. She puts her dreaming aside and heads downstairs to save the animals from her husband. The lack of sleep is showing itself already. Its going to be a long day. Not the day to try to talk about a new toilet.

It is so shiny! The water so clean you can see the bottom of the tub. There was even enough money to install a path so there will be no mud being tramped across the rugs inside. 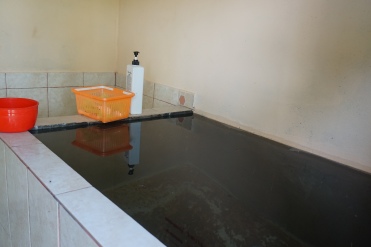 She is now running late to market as the neighbours called in to view this new building, quiz  husband on the cost. Some even wanted to give it try, it has created quite an interest. The people from SAMIC have become quite busy now.

Her smile is one of relief. Her children are better, she sleeps at night. They all have renewed energy to face each day.

A small building can make a big difference to a family in Cambodia.

She climbs on the bike beside her husband. Today she is making her first repayment at the SAMIC office. As her children run ahead on the path, with energy levels tripled she knows she has made the right decision.

Maybe she will ask her husband if she can learn to read soon. A better world awaits her and the children, with a little help. She nods at the Spirits as the bike weaves to market, her smile beaming in the midday sun. 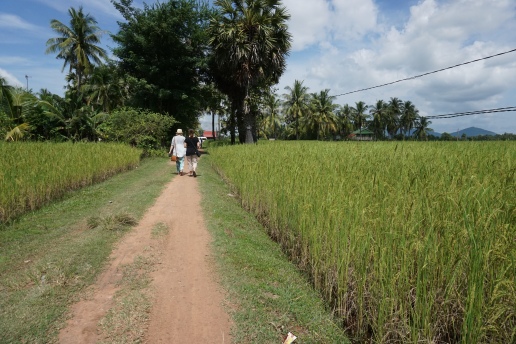 **Inspired by experiences while travelling in Cambodia with Good Return and Xplore.  If you wish to know more, especially the WASH program also see SAMIC.

All photos are my own