It took me some time to decide. I wanted to push myself out of my comfort zone every now and then but not sure this was for me. I had visions of being thrown in a foreign jail, not able to tell family and friends where I was. But maybe I just watched way too many movies.

The country had been a war zone in my lifetime. I have small recollections of learning about the events of the 1970s at school, even raising money to help the poor of the region.

But I said OK, lets do this!

Off I go – to gain the fourth passport stamp of my life.

As the waters of Singapore came into view from the airplane window I contemplated the Australian bloodshed that had occurred decades before as World War 2 knocked on our door and annihilated the land now beneath me.

As a teenager I was fascinated by the World Wars. I watched countless TV series about prisoners in Changi Prisoner of War camp, of women who were captured by the Japanese in 1942 and of course Pearl Harbour and Gallipoli.

As the plane makes it final flight into the modern Singapore I’m taken back to a school assignment interview with a friend of my father who has been a prisoner in Changi and survived. He didn’t tell me much at the time and at 14 I was a little naïve to ask for the detail. As none of my family have a history of service in the wars, these were my only experiences of the bloody battles that ravaged southern Asia last century.

The city beneath me and modern airport, complete with indoor gardens was a stark contrast to what my imagination conjured of Singapore. I celebrated my first footsteps in Asia with a Singapore Sling – it seemed fitting and absolutely glorious after the eight-hour flight.

And then onto our destination, Cambodia. 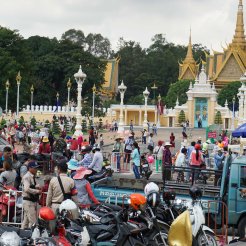 My senses exploded as we exited the airport at Phomn Penh.

Lights from a herd of motorbikes galloped towards us, another line jostled beside trying to sneak past. The air was filled with a peal of horn blasts swirling in with the dust of the evening skyline.

The streets were a coalescent of old with new. A stooped woman slowly wipes the street dirt from a table covered in a plastic faded cloth, beckoning diners to take a seat while next door an elderly man sat on a broken chair minding bric-a-brac that covers every available corner of the shop in the hope a shopper sees a bargain or a necessity.

Youngsters kick an empty drink bottle dispersing other litter and discarded food across the street. A toddler wearing only baggy torn shorts watches, his face a flummox of his day with specks of food, tears and mucus staining his cheeks and running down his bare chest. 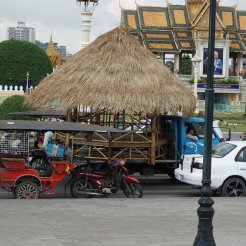 A car tries to reverse from an American clothing store, the security guard holding up traffic to allow the driver to enter the continual flow. A troupe of tuk tuks hang near a club, ready to barter for a ride in the hope of making a meagre wage from Saturday night tourists to finish early and maybe rest tomorrow.

Overhead I spy 3 storey buildings inclining on each other, seemingly built as an afterthought for family expansion. Spirit houses protect the occupants, the ornate gold coating catching the last of the sunlight, the fruit offerings keeping the spirits peaceful. 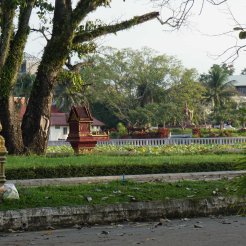 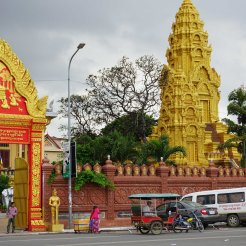 The streets are framed by a spaghetti of electrical wires looping around leaning poles and mixing with neon lights and dilapidated signage, a mix of local chirography and western advertising.

Our driver paints the political and social landscape for us as we bump and thrust through the city traffic. The herd continues to stream by, some laden with 3 or 4 passengers, even a baby slumped asleep over the handle bars. Others tow a small trailer packed with goods from vegetables, building materials to sorted rubbish. We learn there is a market for the rubbish – one person’s trash another’s treasure that can put food on the family table.

We hear the story of our driver’s family, a story we will hear retold by many we meet. The loss of family members in the 1970s, a country pillaged and ravaged through history, a people exploited with their spirit tattered yet unbroken.

Unfinished highways funded by other countries loom in the twilight, while displaced sleep in hovels in its shadows. Our car bounces along unloved roads and past the contrasting grandeur of others.

The grit of this city is smattering on us, our eyes seeing what our minds are not comprehending.

Our ears are hearing the chaos of existence yet our hearts will listen to the silence of oppression.

We steel ourselves for the days ahead. We step into the night, into the city. 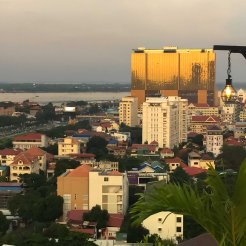